Were it not for the pioneering spirit of Katharine Blodgett, Poindexter from the Felix the Cat cartoons would not be able to see so well.  In fact, Katharine Blodgett is responsible for the way we all view the world. Without the research that she and Irving Langmuir pioneered in the 1920’s and 30’s, we would see things in an entirely different light.

Katharine Blodgett was born in 1898, and raised by her mother.  The education she received wasn’t traditional, as she spent much of her youth in France and Germany.  Her experiences abroad are thought to have contributed to her admission to Bryn Mawr College, where she received her B.A. in 1917.  Afterward, she attended the University of Chicago, where she earned a Masters of Science.  When she was 19, Katharine Blodgett received a job at General Electric in Schenectady, New York.  Not only was she quite young for the job, she was also the first female scientist ever hired by G.E.  There, she assisted Nobel Laureate Irving Langmuir in researching monomolecular coatings.  These coatings are single molecule films, which cover the surface of water, glass, or metal.  They are so thin that 35,000 layers of these films, one atop the other, are the thickness of a single piece of paper.

In 1924, Katharine left General Electric to attend Cambridge University.  She became the first woman to receive a Ph.D. in Physics from the university.  Upon completion of her studies, she returned to G.E. where she continued her research on monomolecular coatings.  She then discovered how to add these films, one on top of the other, to reduce the glare and distortion in glass, resulting in the first ever “invisible, non-reflecting glass”.  Even the clearest glass reflects 8-10% of the light shining on it.  This is why, when viewed straight on, it is visible to the human eye.  By mechanically assembling these layers on a water surface and then compressing them, a film was created which could be transferred to a solid surface.  This discovery has proved quite useful in any product that uses glass lenses, such as eyeglasses, microscopes, cameras, and televisions.

During WWI and WWII, Katharine’s research was of great consequence.  She pioneered methods of de-icing aircraft wings, absorbing poisonous gas, and improving smokescreens.  In addition, the Langmuir-Blodgett films had a wide range of wartime uses, including periscopes, binoculars, range finders, and telescopes.  Katharine’s contributions to science are still pertinent today.  Molecular coatings on surfaces is now a field used in Physics, Applied Physics, Chemistry, Surface Science, Biology, and Medicine. 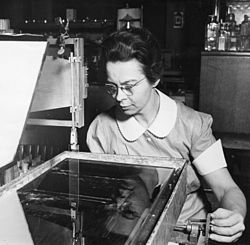 Without the contributions of Katharine Blodgett, the world as we know it would be a completely different place.  Her pioneering spirit and thirst for knowledge have provided us with much of the technology we use.  The computer screen through which you are viewing this article, the glasses you might be wearing, or the projector through which the next film you see is projected, are all possible because of her efforts.