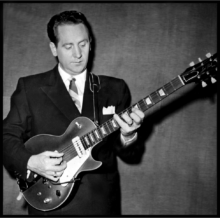 If you love music, you owe Les Paul a debt of gratitude.  He has had an incredible influence on musical instruments, style, recording and playback that dates back to the 1930’s.  His innovations have had a revolutionary effect on every type of recorded music we hear.  He is best known for inventing the Gibson Les Paul electric guitar.

Les Paul, born Lester William Polsfuss, was born on June 9, 1915, to George and Evelyn Polsfuss, in Waukesha, Wisconsin.  He expressed an early interest in music, to his mother’s great delight, and in tinkering with technology.  At the age of eight, Les expressed fascination in a harmonica that a ditch digger was playing during his lunch break.  When Les said he couldn’t play, the man gave the harmonica to young Lester, and said, “Son, you hang onto that mouth organ, and pretty soon you’ll have it licked!  Don’t say you can’t till you prove you can’t.”  Les would later acknowledge that that last sentence was “…the wisest counsel I was ever to have.”

By the age of nine, he had begun playing the harmonica, on street corners and in local PTA contests.  He also began experimenting with the scrolls of his mother’s player piano, punching extra holes into them in order to add musical parts.  Though he was taking piano lessons, his teacher did not consider him a good student, and told his parents to save their money.  The truth was, Les had heard a guitar on the radio, and he was intrigued to the point of distraction.

A Radio and a Phonograph Needle

Radio became a major influence in Les’s life.  Beyond the obvious musical influences, there was the obsession with the electronics and their potential.  At the age of nine, he built his first crystal radio, which he used to search for new music.  Some time later, his friend Claude Schultz loaned Les his carved wood Majestic radio.  Les scrounged around for old radio equipment, and spent time at a local radio station, soaking up what he could from their technicians.  Before long, he had modified the radio and created his own pirate radio station.  His station was audible only to a few homes in the neighborhood, but gave Les a chance to practice speaking on the radio.

He practiced guitar in all of his spare time, and developed a harmonica bracket that he could flip with his chin, thus enabling him to play both instruments at the same time.  Since his performances were often outside, or in noisy environments, he began looking for a way to amplify his sound.  One day, he experimented with wedging a phonograph needle into the wood of his acoustic guitar near the bridge, which he then plugged it into his radio to make an amplifier.  He had just invented his first electric guitar, and he was rewarded when his tips tripled.

At the age of 17, Paul was invited to join a regional country band called Rube Tronson’s Cowboys.  Shortly thereafter, he sang with Joe Wolverton, with whom he later formed the acoustic duet Sunny Joe and Rhubarb Red.  The two played together until 1933.  They attended the World’s Fair, after which Les stayed on in Chicago to work at WJJD.  While there, he performed country music in the morning as Rhubarb Red, and played Eddie Lang-style jazz at night under the name of Les Paul.  It was around this time that he began experimenting with the idea of a solid body electric guitar.

A couple of years later, Rhubarb Red retired, and Les formed a jazz trio with Jim Atkins and Ernie Newton.  Les and the other members of the trio moved to New York, and were regulars on Fred Waring’s radio show.  At night, he went to Harlem to jam with great jazz performers, such as Art Tatum and Roy Eldridge.

A New Type of Guitar

In his spare time, he managed to convince Epiphone to help him build the prototype of his solid-body electric guitar.  The end result was dubbed ‘The Log‘.  It consisted of a four-by-four inch chunk of wood, two pick-ups, and an Epiphone neck.  Two sides were also bolted on, purely for aesthetics.  Paul was pleased with the resulting sustain, saying, “You could go out and eat and come back and the note would still be sounding.”  An additional benefit to his design was that it helped to eliminate feedback, since the acoustic body no longer resonated.  He had finally found the sound he had been looking for.

Les and his family moved to Los Angeles in 1942, hoping to team up with Bing Crosby.  While there, he became friends with Leo Fender, with whom he shared an interest in guitar building.  In the mid-1940’s, Paul approached Gibson with his invention, but they were uninterested, calling it “…a broomstick with a pickup on it.”  However, when Fender introduced the Broadcaster, Gibson came looking for Les Paul.  The collaboration produced a more elegant and stylish instrument, with the signature carved-top contours that defined Gibson guitars.  Les Paul’s name was inscribed on the guitar, and the Gibson Les Paul electric guitar was born.

Les, Mary, and a Car Wreck

In 1945, Les met Colleen Summers, whom Paul describes as “a guitar hippie, and she followed me around from city to city.”  The two began courting, and she eventually became his singer.  Les gave her the stage name Mary Ford, and the two went on to become iconic figures.  On New Year’s Eve in 1949, the couple married.  In the 1950’s they had hit records such as “Mockin’ Bird Hill” and “Vaya Con Dios”.  In addition, they created a TV show called “The Les Paul and Mary Ford at Home Show,” which aired from 1953-1960.  Many of the couple’s recordings employed overdubbing, which was impossible prior to Les’s technology.

In 1948, Les and Mary were involved in a car accident on Route 66, outside Oklahoma City.  Their car slipped on ice, crashed through a guardrail, and dropped 20 feet into a frozen creek bed. Ford’s pelvis was broken, and Paul’s arm was shattered in three places.  The consensus among his doctors was that Les would never play guitar again.  There was also disagreement with respect to whether or not to amputate his arm.  In the end, bone was grafted from his leg to rebuild his arm.  A steel plate was also used to repair his elbow, which was set at a 90-degree angle, thumb pointed in, with the hopes that he would play again.  His hopes were realized, and then some.

After WWII, a German Magnetophon (magnetic tape recorder) was brought to the U.S. by a soldier named John Mullin.  Because of customs requirements, he had to disassemble the machine in order to make it small enough to bring home.  After putting it back together, he demonstrated it at the Institute of Radio Engineers in San Francisco.  The Ampex Corporation took an immediate interest in it and began producing their own version.

The new technology was invaluable to the recording industry because it was erasable and could be used for playback immediately.  When Bing Crosby brought Les Paul the second machine that Ampex produced, he immediately saw the potential it possessed.  Les developed a technology, later known as “Sel-Sync,” in which a previously recorded track could be played back at the same time that a new track was recorded.  Over a three-year period, from 1953 to 1956, he collaborated with Ampex to develop the first eight-track tape recorder.  In doing so, modern multi-track recording was born, thus making Les responsible for the standard procedure for recording music today.

Les Paul’s music and inventions afforded him prosperity and fame, but constant touring and recording took a toll on his family.  Les Paul and Mary Ford divorced in 1964.  By this time, Paul’s own technology had forced him out of the limelight by making Rock ‘N Roll a viable musical form.  To compound that, Paul started having health problems.  An arm injury required surgery, and arthritis started working its way into his fingers.  In 1969, a friend cuffed him on the ear and inadvertently broke his right eardrum, which resulted in some permanent hearing loss.

In the late 1960’s, Les Paul went into semi-retirement and focused on inventing.  One of the inventions to come out of this period was the Paulverizer, a remote control device for a tape recorder that plugs into the guitar.  This allowed the player to control numerous effects from their instrument.  Many of the effects pedals that guitarists use today can be credited to Les Paul.

In 1974, Les Paul went back to professional playing, while serving as the musical director for the television show, ‘Happy Days’.  In a single day, he recorded an album with Chet Atkins called ‘Chester and Lester’.  Unfortunately, a quintuple coronary bypass precipitated another five-year break from performing in 1979.  In an interview with Dave Dianen, Les recalled, “The doctor called me into his office.  He said, ‘I want you to promise me two things.  One, I want you to be my friend, and two, I want you to work.”  When Paul replied in confusion, “I thought that’s what got me in here,” his doctor said, “Hard work never hurt nobody.  I want you to promise me you’ll go back to the clubs.”  Les ended up doing just that, playing at small clubs well into his 80’s.

Les Paul passed away on August 12th, 2009 in White Plains, New York.  Guitar greats such as Eric Clapton, Slash, Jimmy Page, Eddie Van Halen, and more have expressed their indebtedness to Paul’s inventions and musical style.  He was inducted into the Grammy Hall of Fame in 1977, and the Rock and Roll Hall of Fame in 1988.  He was also inducted into the National Inventors Hall of Fame in 2005.  The Smithsonian Institution dedicated a wing of their American Music Exhibit to Les, and he is the recipient of numerous Grammy Awards.  He remains a vital influence in the music and recording industry, and his contributions to the music we all enjoy are immeasurable.