It’s fitting that Esquivel’s name was usually printed with an exclamation point: his trademark is the musical exclamation point. It’s between a “Pow!” sung by the chorus or a “zing” from a harpsichord. Esquivel’s orchestrations were like an exploding musical piñata with arrangements that were strikingly futuristic. Scattered among the pianos and trombones were slide guitar, echo, dissonance, beatnik percussion and weird juxtapositions of mood and volume. His “kitchen sink” approach incorporated Chinese bells, organ, jew’s harp, gourds, and timbales. He is most well known for his musical triumph, ‘Infinity in Sound Vol 2‘.

Juan Garcia Esquivel was born in Tampico, Tamaulipas in Mexico on January 20, 1918. He taught himself piano and arranging at a young age. By age 14 he was a featured soloist appearing on Mexico City’s most popular radio station, XEW. Three years later, the ambitious prodigy organized his first orchestra, a 15-piece ensemble. At age 18 he was composing, arranging, and conducting his own 22-piece band, augmented by five vocalists. In 25 years of hard work he attained immense popularity in his home country. Whether it was from radio and television, or even from nightclubs. Yvonne Rodriguez, a former singer and this third wife, said, “He was absolutely ambidextrous on the piano. The runs you’d normally play with the right hand he’d practice with his left. He loved all kinds of music. Juan wanted to bring every element of music into his show, to have something for everybody.”

Juan came to the United States in 1957. From his first US release, ‘To Love Again’, to his last, ‘The Genius of Esquivel’, Juan created a unique musical legacy that deserves more attention than it has received in the intervening decades. Variety dubbed him the “Mexican Duke Ellington,” while affirming, “Esquivel is to pop music approximately what Aaron Copeland is to serious music or what a John Coltrane is to jazz.” The liner notes on To Love Again (1957) describe Juan’s “dashing appearance,” and the “tasteful elegance of his clothes.”

Juan recorded for RCA Victor from 1957 to 1968. His arrangements took full advantage of the stereo phenomenon happening at that time. Being a musical visionary as well as a talented technician he composed music specifically for the two-channel stereo future. In doing so, he drove his recording engineers, top studio musicians, and RCA executives a little crazy. Without a doubt, he was a perfectionist with passion, a sonic inventor, a dashing genius.

Juan kicked off the Sixties with Infinity in Sound (l960) and one of his finest achievements, Infinity in Sound Vol. 2 (l96l). The songs “Jalousie” and “Sentimental Journey” were used in a famous video sketch, in which pioneering TV visionary Ernie Kovacs  synchronized the music to remote-controlled office furniture and secretarial equipment.  Latinesque (l962), in the opinion of many, was his wildest and most ambitious effort. This tour-de-force featured “raindrop” pianos, Mariachi trumpets, “steel guitar zings,” and cross channel echoes, along with an array of French Horns, tympani, flutes, and tuned bongos. 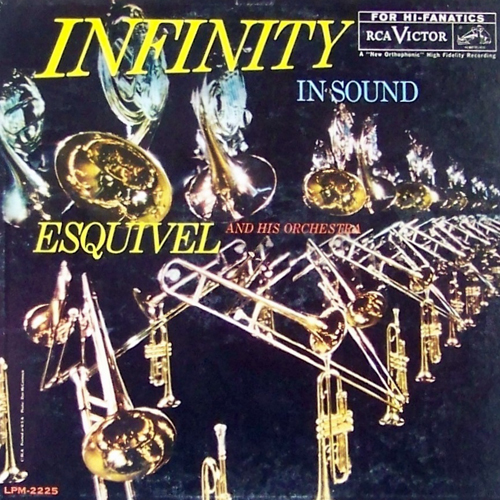 To ensure the purest stereo separation the album was recorded with half the orchestra in RCA’s Hollywood Studio 1 under the baton of Juan, with the other half at Studio 2, a block away, under the direction of Stanley Wilson. Juan counted the bands in via the telephone. The album mix included a then-startling array of stereophonic panning, as pianos and percussion sailed from speaker to speaker, with generous brush strokes of ‘infinite tape reverberation’.  Juan was quoted saying, “My approach was as if I were a painter: I can see the canvas, and music is colors. For instance, F-sharp is like bright red; a flat might be deep purple, or yellow.  Van Gogh had a lot of influence on me, because for his time–even now–his paintings had an extraordinary blend of colors.”

In 1963 Juan switched from studio work to live performance, creating a stage show featuring singers, flashing lights, and choreography. In addition to his orchestral recordings for RCA, Juan composed and recorded short mood pieces for Universal Studios. These themes were used in hundreds of TV soundtracks, including Bionic Woman, Emergency, Harlem Globetrotters on Gilligan’s Island, Incredible Hulk, and Magnum, P.I. In addition, Juan arranged and orchestrated the music for the burial scene in the film 20,000 Leagues Under the Sea.

In 1979 Juan Garcia Esquivel returned to Mexico and composed for a children’s series called ‘Burbujas’. An album of songs and instrumentals from the series went Platinum, selling over a million copies. After Burbujas, Juan settled down in Mexico City, preferring privacy to celebrity. Esquivel’s world renown earned through his RCA albums coincided with a period when rock groups eclipsed orchestras as the popular standard-bearers of pop music.  Consequently, Esquivel was the last great big band leader. He certainly deserves credit as the visionary whose musical rocket fuel propelled the pop orchestra into the 21st century.